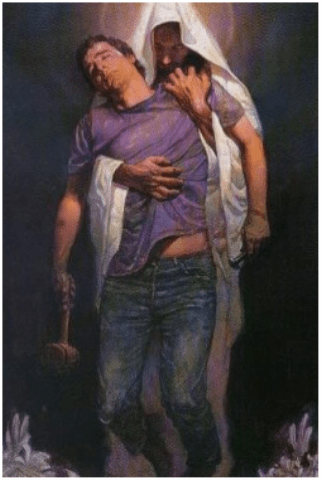 God’s own: called his bride, his sheep, his called out ones etc, were redeemed by another, not by their will, wholly outside them, and fully accomplished by the Lord Jesus Christ. No other possibility, for Christ said he came to do the fathers will John 6:38, that of saving his people from their sins. Luke 1:68 (Jew and Gentile = TRUE ISRAEL. It is not our pride, not our nature (depraved Genesis 6:5, Romans 3:10-19 etc) not our stony heart (pun – under law of Moses, i.e. the stone of commandments that Were against us) and surely not of our wills. …. which were born, (newly created as the new creation in HIM) not of blood (race- Jewish pride in their covenant race), Nor of the WILL of the flesh (by mans effort in obeying the law/NOT), Nor of the will of man (like we brought something to the table), BUT OF GOD. John 1:13 KJV.

My name is Joseph, i was born in Ohio, raised in the best cities in Louisiana, including Slidell, Nawlins, better known as the best city in the world, New Orleans Louisiana. Best food in the world, including Po-Boys, Seafood, and Snowballs. Last but not least of the best things in New Orleans, is, of course, the one and only New Orleans Saints, and Drew Brees himself, where he led them to a Super Bowl victory in 2009-2010 season. Who Dat!!! I also lived in Memphis, Tennessee, where you get to see Elvis Presley and his place, and greatest cue, short for barbecue. Love to gaze and watch Birds, nature, thunderstorms, animals of all kind, and am loved by my Lord Jesus Christ from eternity, I was on his mind. View more posts

This site uses Akismet to reduce spam. Learn how your comment data is processed.